Do we see a hat or a boa having devoured an elephant?

“Collective Pareidolia – art & ecology” is a group of people, artists, researchers who share above all an ecological commitment and an intense desire to create together. “Pareidolia” from the Greek “eidos: form” and “pare: near” is an optical illusion that consists of interpreting and associating a formless and ambiguous visual stimulus with a clear and identifiable element, often a human or animal form, or objects that emerge from the imagination and perceptual history of each individual.

Thus, we have come together in a participatory and creative process that seeks to rethink current environmental issues. To try to respond to this crisis, we believe that it is urgent to develop in-depth work on the imagination and on our attention. In this sense, art appears as a primary means of expression, through which we learn to review and observe the world around us differently. 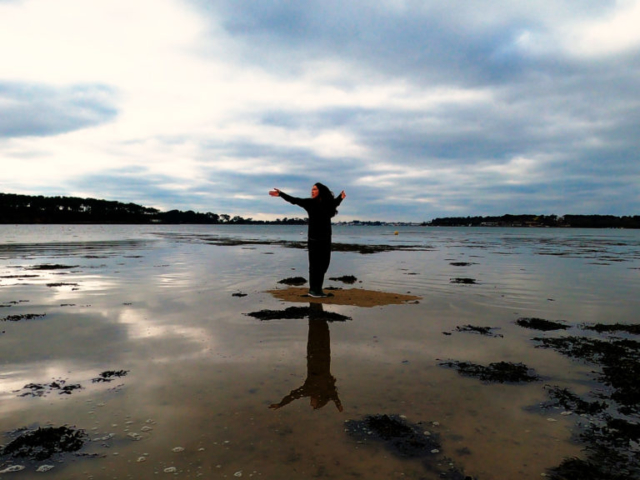 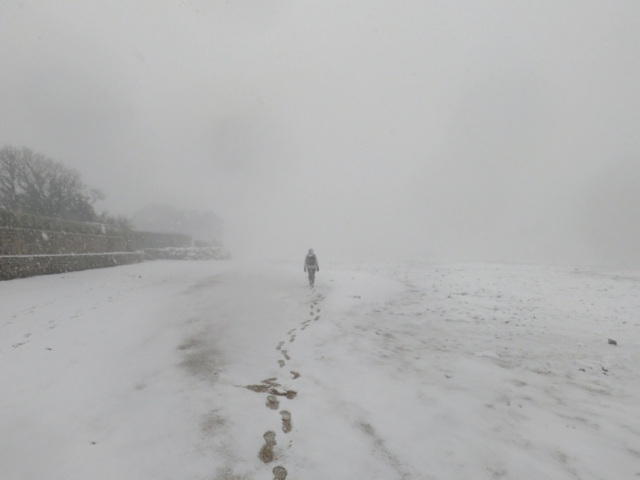 Valentina Morales, born in 1985, completed her training in contemporary dance, choreography and pedagogy at the Espiral school (Ex-UAHC), founded by Patricio Bunster and Joan Turner. In 2010, she began her work as a choreographer and independent dancer and received the Fondo Nacional de la Cultura y las Artes in Chile (Fondart) for the creation of her interdisciplinary work “Un Viaje a Macondo” (2011), inspired by the work of Gabriel García Márquez, “One Hundred Years of Solitude”.
In 2011, she moved to France to do a master’s degree in the Dance Department of the University of Paris 8. Under the direction of Isabelle Ginot, she devoted herself to research around Pina Bausch’s dance aesthetics. (1940-2009). In 2013, she received the chilean scholarship ANID to continue her work through a doctoral thesis.
In June 2019, she obtained the degree of Doctor in Dance and Gesture Arts with a thesis entitled A corporeity of solitude. For an aesthetic of Pina Bausch’s dance, and became associate researcher Laboratory “Dance, gesture and corporeity” (MUSIDANSE), université Paris 8.
In January 2020, she founded with Hugo Cordeau the collective Pareidolia art & ecology. She lives in Wuppertal and is carrying out in 2022 the post-doctoral project “Los tránsitos de un gesto I” (MUSIDANSE, CN D, aCD) which studies the choreographic transfers between Chilean and German dance through the figure of Patricio Bunster, Joan Turner and the Jooss-Leeder system. 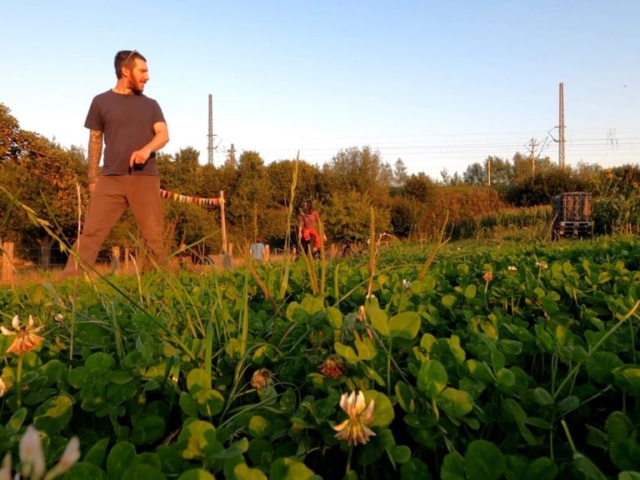 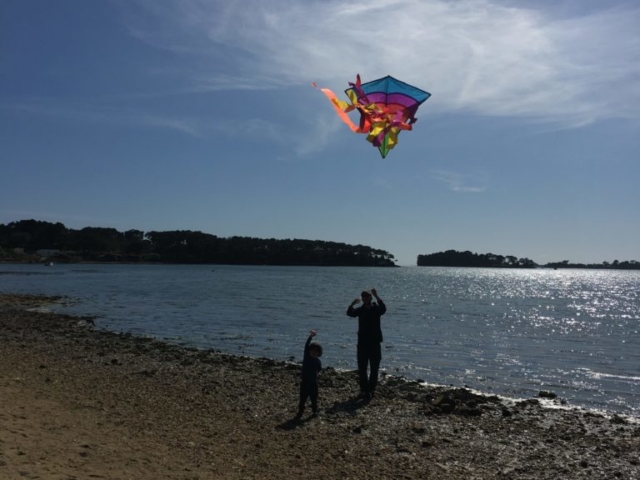 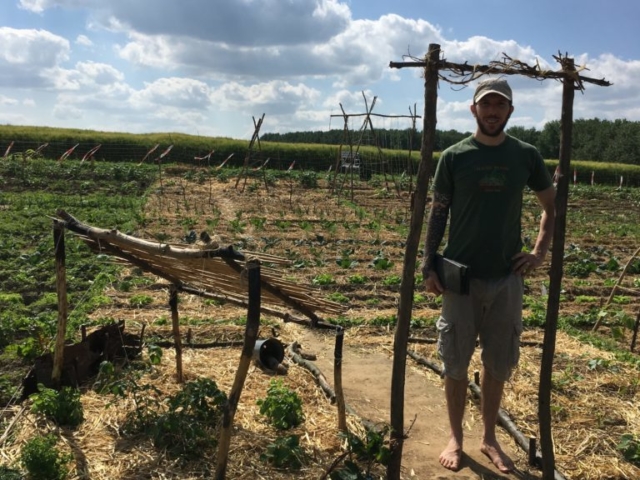 Hugo Cordeau is passionate about systems. Born in Paris in 1987, as a teenager he became interested in code and the creation of sites. Internet being then in full effervescence. He started in 2008, working in different companies as a web designer & graphic designer. He added 3D modeling and Motion design to his skills and finally set off as a freelancer in 2014, mainly for communication agencies.
It was in 2018 that the young father left Paris, to settle in Wuppertal, and develop other skills and passions for artistic creation. Questioned by the Anthropocene and the state of the world as we know it, Hugo is also interested in the fields of permaculture, low-tech or primitive technologies. It was then that he co-founded the Collectif Pareidolia with Valentina, one hand in the code, one in the earth and the third with his camera. The idea: to sublimate the living world, to transmit the desire to live more soberly and to reclaim the know-how that certain technologies confiscate from us. 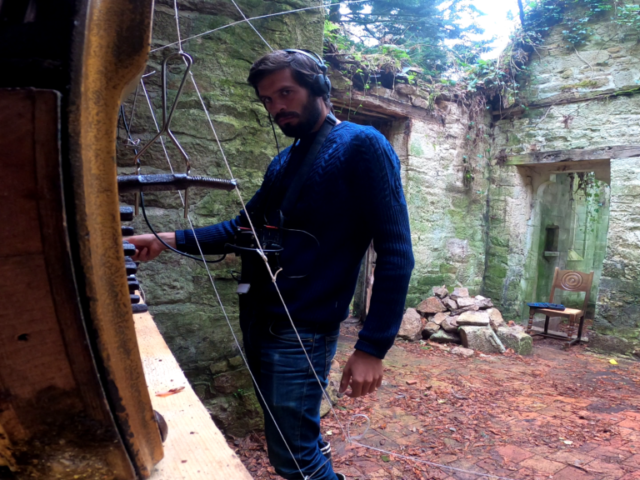 Jean Poulhalec is a composer, arranger, guitarist graduated from the “American school of modern music” in 2012. He has worked as a guitarist and bassist for various groups including: Ours, Colombine, Julien Granel, Kungs, Ex-ile, Bumby.
He has also been guitarist for Juliette Armanet since 2017. He also specializes in the musicalization of documentaries, short films, video games as well as live performances, in particular for pieces by Caroline Duffau. 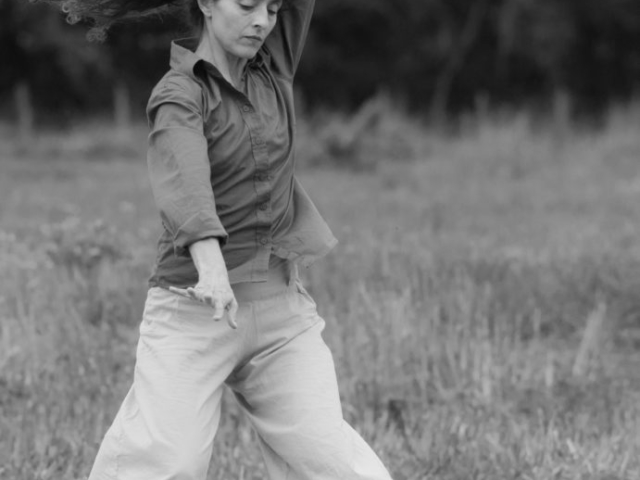 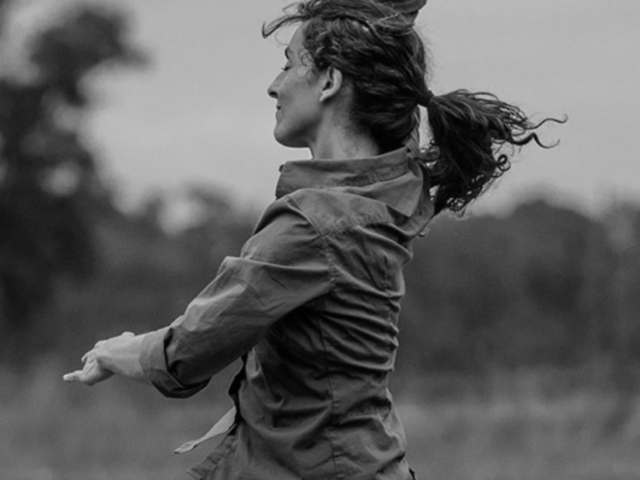 Patricia Campos obtained a degree in dance, cultural mediator and agricultural engineer. She has done academic work in universities, in the fields of choreographic composition and critical appreciation of dance, and as a teacher in kindergartens, schools and other educational projects.
She has experience in management, cultural production and artistic creation, with companies and independent groups in Chile.
Since 2007, she is co-creator of “Corriente Danza”, a mediation project for the training of school audiences. She works as an independent artist, in scenic and audiovisual creation and is part of the companies “Innata” and Ballet Municipal de Cámara de Valdivia. 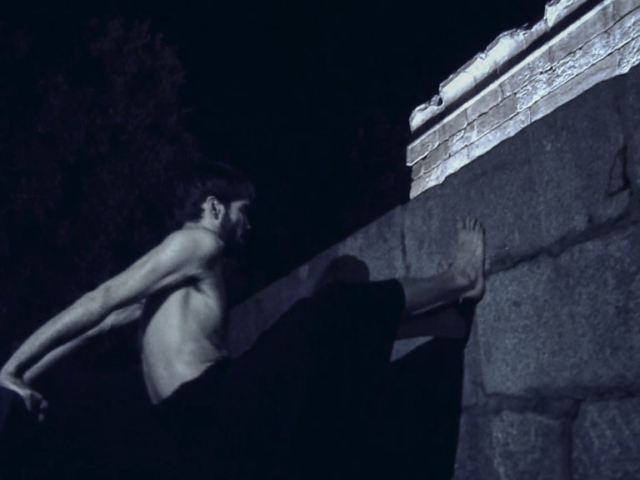 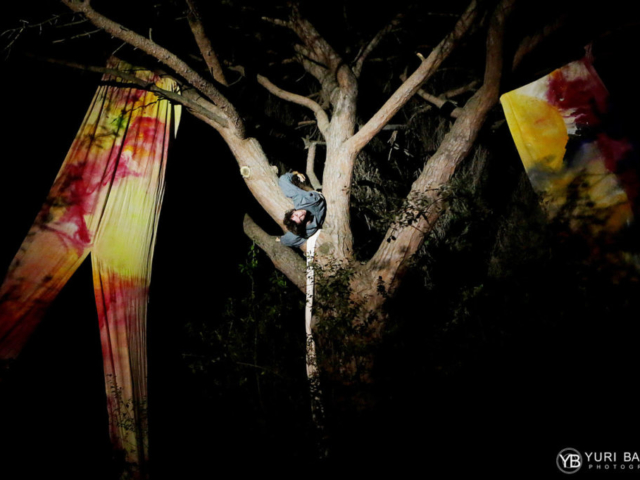 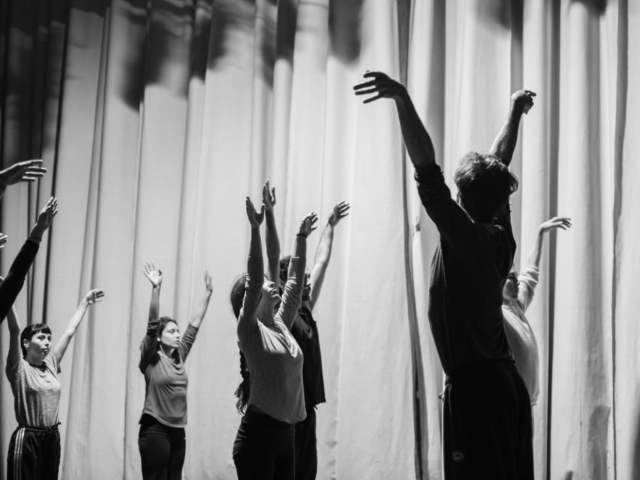 Pau Aran (Cerdanyola del Vallès, 1981) is a dancer, choreographer and dance teacher, born in Spain and living and working in Germany since his youth. While studying at the Professional Dance Conservatory “Mariemma” in Madrid, Pau was invited to attend the Folkwang University of Arts in Essen, Germany. This led to his most extensive training to date, in Wuppertal and under the guidance of Pina Bausch.
Since 2013, and alongside the teachings received in his dance courses, he has created his own pieces with which he dances in several countries such as Germany, Spain, France, Italy, Chile and Japan. Pau develops the expression of his art through body language, focusing his work on the creation and pedagogy of contemporary dance. The beauty of movement and its interest in the poetics of contemporary dance are well represented in his projects, creating intimate spaces where the public can breathe and open their emotions, thinking of the stage space as a temple to reconnect with oneself through art. .
In 2020, he created the dance company that bears his name to transmit the knowledge he has accumulated throughout his career and integrate it into his own choreographic work. Feeling the need to offer and transmit their experiences to the next generation, while promoting the self-discovery of students and performers, he works and strengthens their own identity, adapting the methods learned to the new reality. Combining the passage of time and the transience of dance, merging heritage and tradition with the future.
The company’s first creation, Lettre d’Amour, premiered at the Grec Festival in Barcelona. In her new research and work, Pau is primarily interested in the relationship between gender and movement through the intergenerational journey, as well as how contemporary culture and new forms of communication influence it. 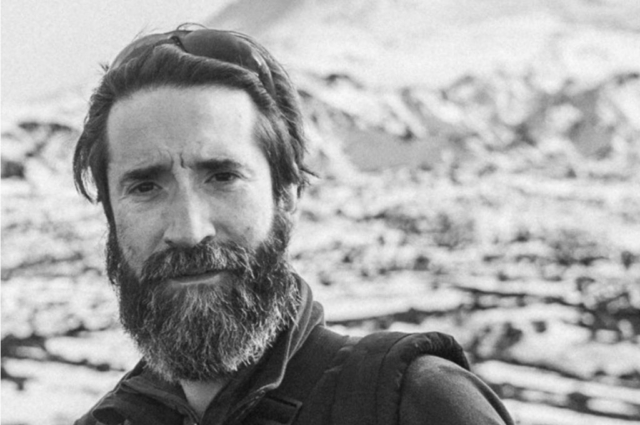 Director, lighting designer and musician from the city of Valdivia. His works appear in the form of documentary and fiction.
The director stands out with the films “Los pasos Buscados” (2017), “Curiche” (2018), and the cultural television series “Buscando el instrumento madre” (2016), and his collaborations with artists Christian Boltanksi, Eli Sirlin and Ferdinand Prats.
He also directs the audiovisual production company GUAIRAO, where he develops a creative process around theater, dance, light and music.
He specializes in photography and works on projects related to documentary, heritage and cultural archives in southern Chile and internationally. 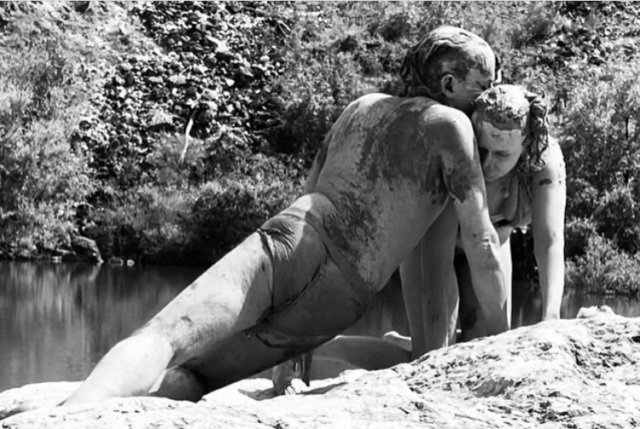 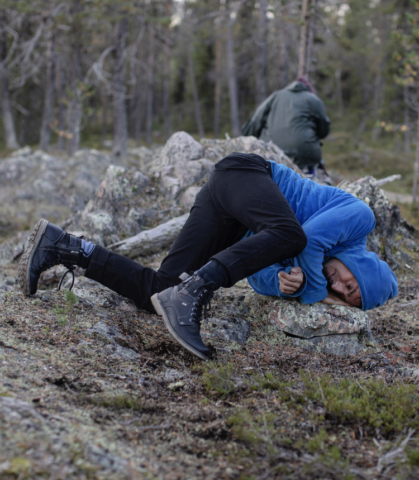 Hugo Peña, is a choreographer and pedagogue in dance, graduated in Dance from the University Academy of Christian Humanism (Espiral School) in Santiago, in addition to his studies in Architecture at the Bio Bio University in Concepción. Between 2007 and 2016, he is a teacher of the Dance and Theater career at the Faculty of Arts of the UAHC. He participates as a performer and choreographer in the Spiral Dance Company, Cross Dance, Seventh Dance Company, DeRRe Dance, Concrete Dance Company and various groups. He is an Associate Researcher at the Center for Research in Latin American Aesthetics, Faculty of Music, University of Chile. Between 2012 and 2015 he is a fellow and then a collaborator of the interdisciplinary laboratory MOVIMIENTO SUR, an international platform for contemporary dance and performing arts for Latin America. Since 2019 he has been invited as an artist to different Symposia in Finland (Mustio, Lapland), Italy (Naples, Irpinia). He is also Artistic Director and creator of the « Al Margen » project, where he investigates the relationship between the body, memory and architecture through interdisciplinary proposals. He currently resides in Berlin where he collaborates with different visual and sound artists on various international platforms.